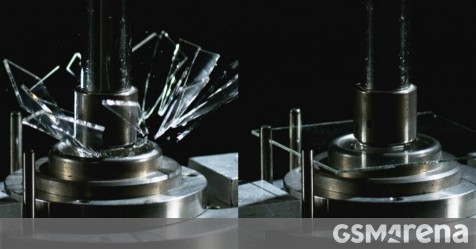 Corning just introduced the next generation of Gorilla Glass – no, not “7”, but “Victus”. The new aluminosilicate glass promises significantly improved resistance to scratches and falling onto hard surfaces compared to competing glasses and even older GG generations.

In tests, Victus has shown that it can shrug off a face-first fall on a hard surface from 2 meters (6.5 ft). That’s a drop onto concrete from head height.

Gorilla Glass Victus is also more resistant to scratches. In the Knoop hardness test (which focuses on the force applied and uses a diamond to do the scratching), the new Corning glass gets only minor scratches with an 8 Newton load while a sample of a competing glass suffered worse at half that force.

This goes beyond aesthetics (though that is certainly important too). The same two panes of glass were tested for durability and the defects caused by the deeper scratches made the other glass shatter much easier than Victus.

Check out the video below to see these and several other tests performed:

Samsung will be the first company to introduce a product with Gorilla Glass Victus “in the near future”. Other manufacturers are also working on flagship phones using Corning’s new glass, but info which ones is kept under wraps for now.