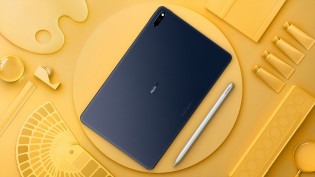 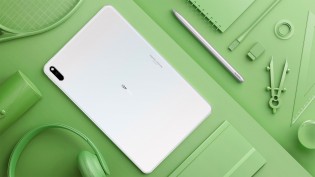 The Huawei MatePad 5G builds on the MatePad 10.4 from earlier this year

Chipset aside, there are more similarities than differences. The MatePad 5G has the same 10.4” IPS LCD panel with 2,000 x 1,200 px resolution. Next to it is the same 8 MP front-facing camera, on the opposite sides is another 8 MP cam. There are four speakers mounted around the perimeter along with four microphones.

Charging is done over the USB-C port, which now has to serve double duty as the wired headphones port – the 3.5 mm jack has been dropped (at least you get a Type-C to 3.5 mm adapter in the box).

This tablet is compatible with a couple of key accessories – a hardware keyboard cover and the M-Pencil stylus. Since the slate runs EMUI 10.1 (based on Android 10, no GMS), it supports Huawei’s desktop experience, which can turn it into a compact laptop replacement.

The Huawei MatePad 5G can already be pre-ordered from Vmall.com at a price of CNY 3,200 in White and Gray. For comparison, the MatePad 10.4 with LTE and the same 6/128 GB memory configuration goes for CNY 2,500. There’s no word on if and when this tablet will be available globally.