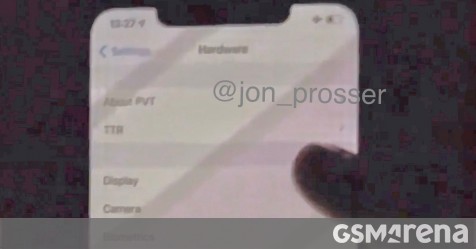 The latest iPhone 12 leak comes from @Jon_Prosser who has corroborated major iPhone leaks in the past. In screenshots and a short hands-on video obtained by Prosser, the iPhone 12 Pro Max will feature the 120Hz refresh rate display after all. This news comes just under two days after reports came, claiming that the iPhone 12 Pro would not have this kind of display due to supply issues.

The leaked screenshots are allegedly from an iPhone 12 Pro Max PVT (production validation prototype) which is a manufactured device that comes off the assembly line after the first run of mass production at full speed. This device should reflect near-final hardware and software.

The first screenshot shows a Camera menu with a toggle labeled “Enable Camera Features” which enables the LiDAR features that use the new rumored camera. Aside from enabling LiDAR, other toggles enabled include an enhanced night mode, advanced noise reduction, bit depth video recording, zoom capabilities, and other video modes.

The second screenshot above confirms that this test production device has a 120Hz refresh rate (allegedly). These aren’t technically final production devices, so it is still plausible that Apple could drop the feature for the final hardware.

Face ID works from wider angles. Even flat on a table.

Sides are flat, but glass has slight curve.

In a separate tweet, Prosser suggests that the notch will stay the same size and that bezels are “noticeably thinner”. He also mentions that Face ID works from a wider angle, the phone’s sides are flat while the glass has a slight curve, and that the camera setup around back.

The iPhone 12 Pro is expected to be announced sometime next month and reports suggest that Apple may not actually begin shipping the new iPhones until the next month, in October.