The Moto G 5G Plus was the company’s first affordable smartphone with a price point of under $400. Reports suggest that the G 5G Plus will arrive with different names in other markets. The Motorola device sold in Europe is the XT2075-3.

Motorola One 5G with model no XT2075-2 is in the works. The same model no has earlier appeared on TÜV Rheinland with 4700mAh battery & up to 20W charging. This smartphone could be the rumored Motorola Edge Lite#MotorolaOne5G

FCC documents have revealed that the XT2075-2 will have the same charging adapter (MC-201) and battery (MZ50) as the Moto G 5G Plus. The adapter outputs 20W to recharge the 5000mAh battery. 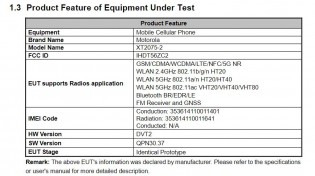 A (seemingly) deleted tweet from Evan Blass reported that in the US, the same device will arrive at AT&T in the US called the Motorola One 5G.

The Moto G 5G Plus is powered by the Snapdragon 765 chipset and brings support for sub-6 GHz 5G networks. It has a 6.7-inch 90Hz LCD screen. It has a large 5,000 mAh battery and its quad cameras consist of a 48MP main camera, an 8MP ultra wide camera, a 5MP macro shooter, and a 2MP depth sensor. It has a NFC, a headphone jack, and a rear-mounted fingerprint sensor.