Yesterday a couple of leaked images gave us a very clear look at the OnePlus Nord that’s coming on July 21 and today its full specs sheet surfaced, leaving little to the imagination.

This information comes from reliable leakster Evan Blass who posted an image of a virtual Nord training presentation on Twitter, that includes all the specs of OnePlus’ 2020 mid-ranger and imagery of the phone which is just a placeholder.

OnePlus already confirmed that Nord will be powered by the Snapdragon 765G SoC, but now we know it will come with 8GB and 12GB RAM and have two storage options – 128GB and 256GB. The smartphone will run OxygenOS 10 out of the box which will be likely based on Android 10.

The Chinese phone maker also confirmed that Nord will sport an AMOLED display with a 90Hz refresh rate and the specs sheet now reveals that it will have a diagonal of 6.44″ and a pixel density of 408 ppi. The screen will also have a fingerprint reader underneath for biometric authentication.

Previous leaks claimed that OnePlus Nord will come with a total of six cameras – two on the front and four at the back. The specs of the front-facing shooters match previous leaks but there’s a minor mismatch with the rear cameras. 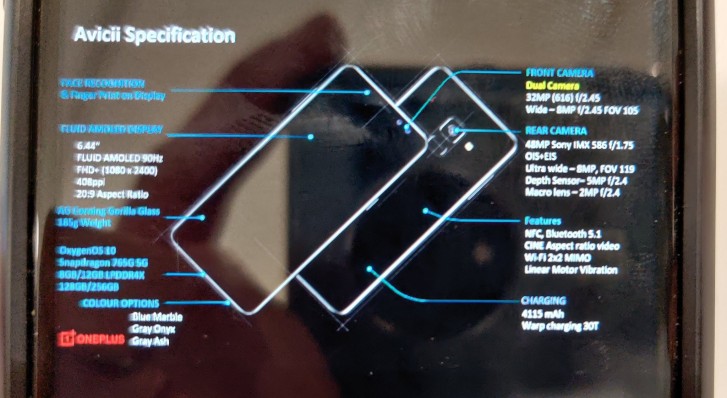 Previous leaks said that the quad camera setup on the OnePlus Nord will be a combination of a 48MP main, 8MP ultrawide, 5MP macro and 2MP depth sensor units, but the new leak reveals that 5MP unit will be a depth sensor and the 2MP module will have a macro lens.

The OnePlus Nord will pack a 4,115 mAh battery with 30W fast charging support, weigh 185 grams, and have three color options – Blue Marble, Gray Onyx and Gray Ash. For connectivity, it will have Bluetooth 5.1, NFC, and Wi-Fi 2×2 MIMO onboard.