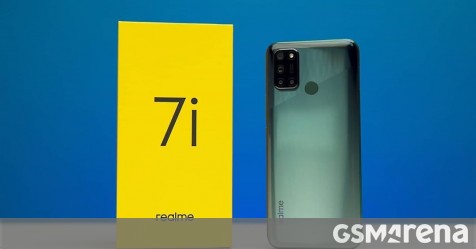 The Realme 7i is coming tomorrow and we already know what the smartphone looks like – thanks to its renders listed on an e-commerce website. Now we are looking at the live images of the Realme 7i which were shared by a couple of Indonesian reviewers on Instagram.

These pictures show the Realme 7i in two colors, which according to Lazada’s Indonesian branch are called Champagne and Jade. The smartphone appears to have a two-tone design – the top portion seemingly has a glossy finish, with the rest having a matte finish. 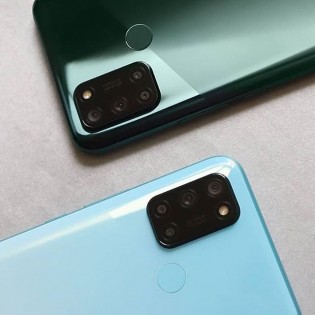 The back of the phone is home to a fingerprint reader and an L-shaped quad camera setup. A couple of images also include paperwork which confirms the smartphone will pack a screen having a punch hole in the upper-left corner.

One of the images also shows us the back of the phone’s retail box, which confirms key specs – Snapdragon 662 SoC, 90Hz screen, 64MP quad camera, and 5,000 mAh battery with 18W charging. 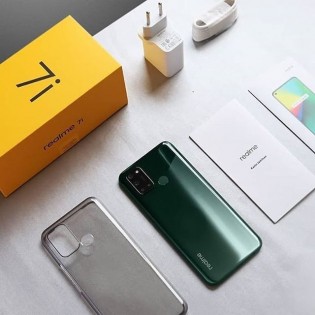 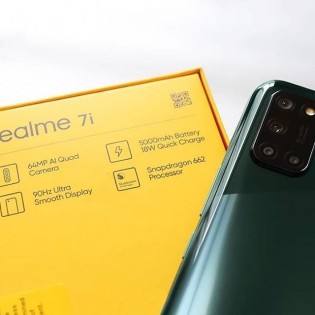 One of the reviewers says that Realme 7i will come with 8GB RAM and 128GB storage onboard. Realme hasn’t revealed the full specs sheet of the 7i yet, but unconfirmed specs include a 6.5″ HD+ screen, 16MP selfie camera, and the 64MP primary camera joined by an 8MP ultrawide and two 2MP units – likely macro and depth sensor.