Realme C11 gets benchmarked and unboxed before its official announcement 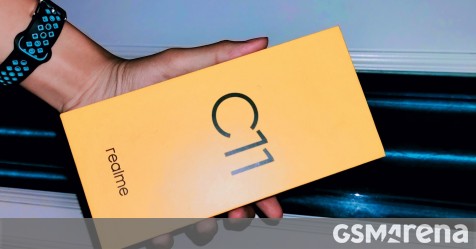 The Realme C11 (model name RMX2185) ran Geekbench, which gives us an opportunity to learn more about the MediaTek Helio G35 chipset. Also, someone from the Realfans Vietnam Facebook group posted an unboxing of the new gaming-oriented phone.

Geekbench reports the motherboard as oppo6765, which isnt very helpful. However, comparing it to the RMX2027, aka Realme C3 with the Helio G70 chipset, makes it clear that the G35 wont be fastest chip around.

Yesterday official teasers mentioned Cortex-A53 CPU cores and this is in line with the single-core score in the test. The CPU does run at 2.3 GHz as advertised, but thats not nearly enough to match the G70, which has two big Cortex-A75 to do the heavy lifting (A7x vs. A5x is never a fair fight).

Also notice the 2 GB of RAM. To be fair, the C3 also starts at 2 GB in its base configuration. However, given the chipset we get the impression that the C11 will sit lower on the price scale, so it may have lower maximum capacity (the C3 is available in 4/64 GB configuration).

Now, the unboxing. You dont get to see much, but you can tell that the phone has a teardrop notch for the selfie camera and a dual camera on the square bump on the back. It comes with a charger and USB cable in the retail box.

The Realme C11 will be officially unveiled on June 30 (Tuesday next week), the event will be livestreamed. Even though the teasers are coming form Malaysia and Vietnam, the C11 should be available globally.