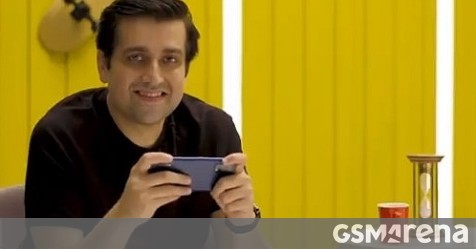 Realme 7 and Realme 7 Pro are arriving on September 3 and at least one of the phones will pioneer a new chipset. Madhav Sheth, CEO of Realme India and Europe, posted on his Twitter page a confirmation the all-new handset will be launched in India, and he is using it in a short 10-second video.

I am happy to bring another World’s First Processor & yes, we are launching it first in India with the #realme7series. We will continue to introduce #TechTrendsetter products to mid-range too and raise the bar for a smoother experience.

The phone is hidden in his hands well enough to stop us from making out any key features, but we do see a camera island on the back with three or four shooters and the LED flash sitting in the bottom right corner of the dark rectangle.

We also see the power key sticking out the right side, meaning it won’t double as a fingerprint scanner, leading to the assumption this is the Realme 7 Pro rather than the vanilla version.

The FP sensor is likely to appear under the screen, meaning this device has an OLED panel – a first for the Realme number series. We expect the technology to get to the Realme X7 Pro as well, and we’re still wondering whether they’ll be the same devices as the Realme 7 or the company is planning to introduce two completely different midrange lineups for its domestic crowd and the global fans.