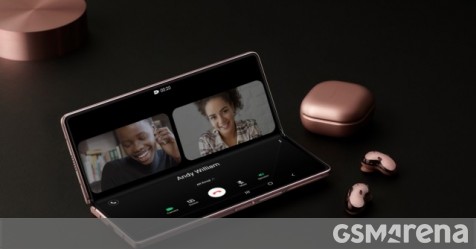 Several of the designers behind the new Samsung Galaxy Z Fold2 are taking an in-depth look into how the new foldable improves the user experience over the original model. A key design goal was to enlarge both displays, but software plays an important role too – apps need to be able to seamlessly switch between working on the cover screen and on the larger main screen.

The work to expand the screens was balanced with the desire for portability so the Z Fold2 stuck close to the size of its predecessor. Most of the extra room was found by slimming down the bezels and removing the notches.

Even deciding on the color scheme was a team effort – Samsung consulted global experts before settling on the Mystic Bronze hero color. For a more personal touch, the designers wanted to give consumers to option to customize the panel covering the hideaway hinge.

If you want to learn more about the new hinge, the video below goes into detail. The new mechanism benefited from the improvements Samsung made for the Galaxy Z Flip, which first enabled Flex Mode.

Flex Mode – closing the Z Fold2 half way – has some interesting applications. The phone can be its own tripod when taking selfies or shooting time lapse videos. The dual cam hinge can hold the screen angled at 75° or 115°. This half-closed position also changes the camera UI in interesting ways, see it in the video below: