Last week a phone with model number ZTE A2121 appeared on numerous certification pages, suggesting the Chinese manufacturer is bringing a successor to the ZTE Axon 10 Pro 5G, codenamed A2020. The company CEO said it will be the first phone with an under-display camera, and today the official page on Weibo revealed it will be called ZTE Axon 20 5G. The new device will be launched on September 1, which is in two weeks. 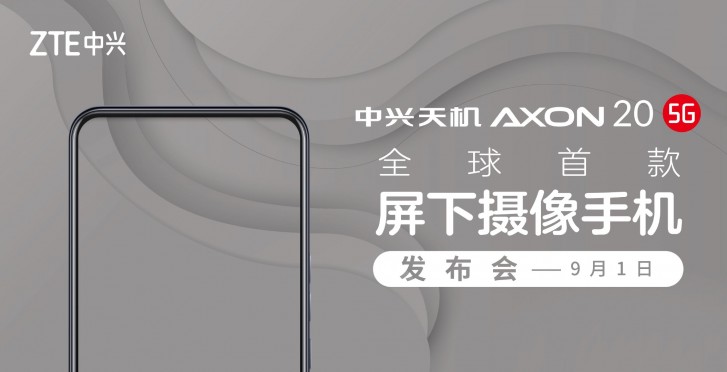 The Axon 20 5G is not going to be the first mobile with under-display camera in the world, but will be the first commercially available smartphone – after all we’ve already tested a demo unit, manufactured by Oppo. We expect to see how ZTE managed to circumvent the poor light transmittance through a screen, since this is one of the main hurdles the smartphone industry is facing.

The panel is likely to be developed by Visionox, one of the biggest OLED manufacturers in China. The company has already completed the R&D process of the UD camera solution and it says it will work by optimizing the pixel arrangement around the camera’s lens, although this might be an issue for fans who want a 4K or even 1080p shots.

While we’re still playing the guessing game, the phone is already on TENAA, revealing some of its more straightforward specs – we’re looking at a 6.92” OLED, a 32 MP front-facing shooter, a 64 MP main one on the back, and a chipset that is likely to be the Snapdragon 765G.