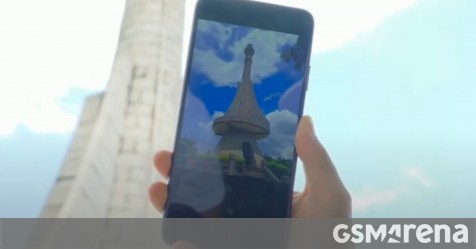 The official unveiling of the Honor X10 Max is still over a week away (its scheduled for July 2). TENAA already revealed most of the specs, but it missed a defining feature of the screen  it will be very bright and will offer excellent sunlight legibility. A video demonstration of that hit the web today and filled us in.

The test was performed near the Tropic of Cancer Marker where at the right time of day the sun is directly overhead. And it shines brightly  168,000 lux  yet the sizable 7.09 display remains perfectly legible.

The secret? It uses an RGBW matrix, that means every pixel has a white sub-pixel. Weve seen these in the past and while they are indeed brighter than typical LCDs, the image quality has been an issue.

At least the extra brightness is achieved without putting an extra drain on the battery as removing the color filter on the W sub-pixel lets more light through. The battery will have 5,000 mAh capacity, by the way.

Also, since the video shows the phone taking a photo of the Marker, heres what we have on the camera so far  the rear will feature a 48 MP main sensor plus a 2 MP helper (most likely a depth sensor), the front will put an 8 MP camera inside a teardrop notch.