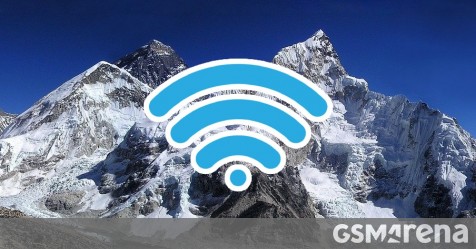 The base camp at Mount Everest now has 5G coverage, thanks to China Mobile. However, even at 5,364m above sea level (17,598ft), this is not the highest place on Earth that you can get a 5G connection  currently that is the Intermediate Camp at 5,800m.

China Mobile celebrated its 20th birthday this month, it became independent on April 20 2000 after the breakup of the state-owned provider. To honor the occasion, the carrier overhauled the 177km transmission line that connects the Base Camp to its main network.

This line now powers three 5G base stations and three 4G ones. Eight tons of networking equipment were hauled up, which also allowed CM to also build two 5G base stations at the Intermediate camp. Theres a team of twelve people providing 24/7 technical support.

The new high-speed connection can be used to broadcast video live from the camps whether its day or night.

China Mobile will go even higher  two more 5G base stations are expected to be completed this Friday, they will operate at the Advanced Base Camp at 6,500m (21,300ft).

Heres a quick history of cell coverage on Mount Everest. The first 3G connection from Base Camp was established in late October of 2010, allowing video calls. A few months later in 2011 the a tweet from Everest was sent out from a Samsung Galaxy S II (which also starred in the worlds highest unboxing video). By the way, this wasnt the first tweet from the summit, that one came in 2010 via satellite. In 2013, China Mobile flipped the switch on the first 4G tower in Base Camp and demonstrated a live video stream in HD.