The Nokia 8.3 5G will make a decent mid-ranger if HMD has the decency to price it as one  thats the conclusion from last weeks poll. At 600, this phone has to go up against the likes of mainstream flagships like the Xiaomi Mi Note 10 Pro (560), newcomers like the Realme X50 Pro 5G (600), various gaming phones and affordable 5G mid-rangers like the Xiaomi Mi 10 Lite 5G (350).

How can the Nokia 8.3 5G fend them off? Unskinned Android One software and a reputation for timely OS updates (even on old phones) is a good start. However, many in the comments called that latter part into question (HMD did push back some updates due to the COVID-19 outbreak, but it’s still doing better than most).

The phone does have a 64MP camera on the back, but those are pretty common these days and the lack of a telephoto cam is limiting. Whether or not the ZEISS brand carries any weight with the modern smartphone buyer is unclear. However, the camera lacks 4K/60fps video capture, theres no OIS either, making it clear that this is more of a mid-range offering.

Its the same with the battery  4,500mAh and 18W charging isnt bad, but its nothing that dozens of other phones cant offer. And those dozens of phones are typically cheaper. The 6.81 screen (IPS LCD with HDR support) is larger than most, which will appeal to some, but again, theres no shortage of large screens out there. 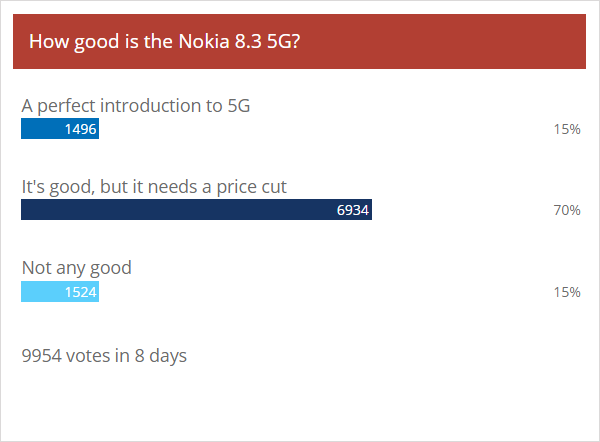 With a faraway launch set for July, this Nokia doesnt even have first-mover advantage (the Mi 10 Lite is coming next month). Even if some early adopters decide to splurge for the latest tech, this isnt it.