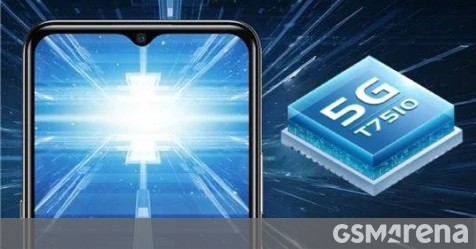 Hisense may not be a household smartphone brand, but the company does know how to grab attention with things like 10,000mAh batteries and color e-Ink on phones. The latest model is interesting for another reason  its powered by a 5G chipset from a new vendor. You dont hear that every day, even Intel was unable to keep up with the complexities of developing 5G hardware.

The Hisense F50 5G was teased on Weibo today and will be officially unveiled on April 20. This isnt a premium phone, instead its part of the effort to make 5G affordable. The handset uses a pretty standard back-mounted fingerprint reader and a teardrop notch for the selfie cam.

The Unisoc T7510 chipset uses the Chun Teng V510 baseband that was developed in-house by the company Ziguang Zhan Rui. It was first demoed at MWC 2019 and supports sub-6GHz 5G with up to 100MHz of bandwidth. 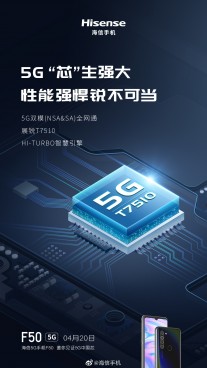 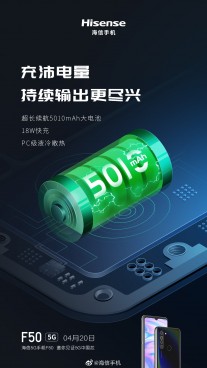 The rest of the chipset uses off the shelf parts including an octa-core CPU  4x Cortex-A75 at 2.0GHz and 4x A55 at 1.8GHz. They are joined by an Imagination PowerVR GM9446 GPU and a dual-core NPU (of unknown provenance). Local connectivity supported by the chipset includes Wi-Fi 5 (ac) and Bluetooth 5.0.

As for the Hisense F50 5G itself, it will have a large 5,010mAh battery with 18W fast charging and PC grade cooling (whatever that means). The phone also packs a quad camera setup on the back, but there are no official details on the four modules yet. That and the price should be revealed on Monday.