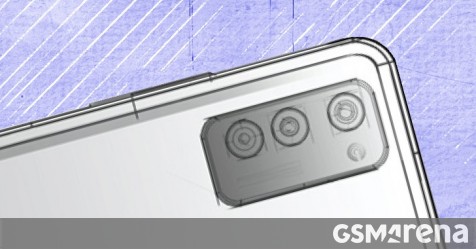 The main camera will use a 50MP Sony IMX7xx sensor with 4-in-1 pixel binning (resulting in 2.24µm pixels). It seems like it’s not the same sensor as the one in the P40, however (which has slightly larger pixels).

An earlier leak showed that it’s still a massively impressive sensor, 1/1.3″ in size. And it will have Full-Pixel autofocus, what Huawei called Octo Pixel autofocus (a more advanced version of Dual Pixel AF).

The 12MP ultra wide-angle camera will also support binning and the resulting pixels will be even bigger, 2.8µm. Finally, the 8MP telephoto camera will offer 3x optical zoom.

Again, the sketch may not be perfectly accurate, but it looks very much like the Honor 30S seen in official posters, so it’s probably not far off. The 30S will have a different setup, sporting a 64MP main camera (and a similar 3x zoom camera). It will be powered by a Kirin 820 chipset and will support 40W wired charging.

The Honor 30 will probably have a faster chipset and the same 40W charging support. Whether it will be unveiled on March 30 alongside the 30S is unclear right now.