Oppo is expected to launch the Ace 2 5G on April 13, and yes, you read that correctly, the Reno moniker is gone from the name. The company has been heavily teasing the phone and now is has posted some more specs online.

The Oppo Ace 2 will have a display with 90Hz refresh rate and 180Hz touch sampling rate. 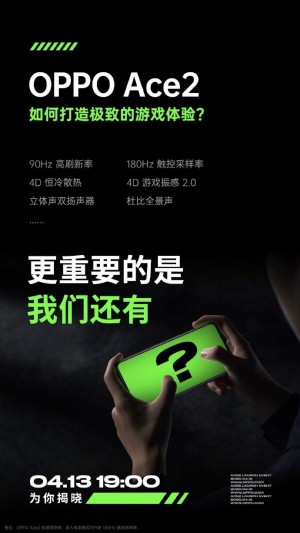 The image posted by Oppo on Weibo also reveals second-generation 4D vibration and 4D internal cooling, whatever that means. These are specifications usually seen in gaming smartphones – like the Black Shark 3, nubia Red Magic 5G, or the ROG Phone II. However, Oppo VP Brian Shen confirmed on his profile on Weibo that this isnt a phone for gaming – it is a flagship for gamers.

Shen explained this means all the top-notch specs that one might want for online gaming, but also a phone acting as a regular daily driver that can take photos, look nice, and perform well over time.

The Ace 2 specs have already appeared on TENAA, and we know the phone will have Snapdragon 865 chipset with a 5G modem. It will also have 65W fast-charging but is likely to introduce 40W wireless fast charging, called AirVOOC, which would be an industry first. The price is likely to be CNY4,399, which is around $620/570.