One of the first solid evidence that the Oppo Reno4 is in the works leaked yesterday but aside from a couple of features and official Oppo posters, nothing else was disclosed. Luckily, today’s leak is big enough to give us a good idea of what to expect, not only from the vanilla model but from the Pro version as well. And the seemingly official renders are quite revealing too. 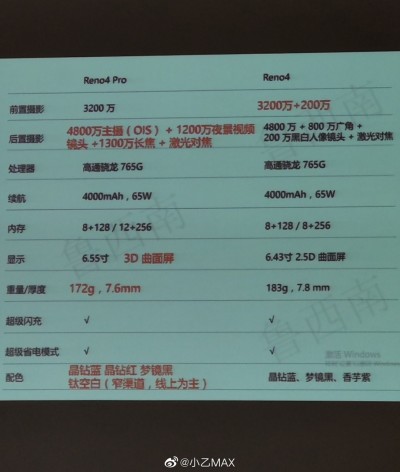 Starting with the alleged specs of the Pro, we have a Snapdragon 765G chipset running the show paired with either 8GB/128GB or 12GB/256GB memory. The display is 6.55″ big and it’s curved to the sides. The module on the back consists of a 48MP main camera with OIS, 12MP dedicated shooter for low-light videos (as per the rough Google translation) and a 13MP telephoto lens with no specifics provided. The front camera is 32MP. The battery should be 4,000 mAh for both variations with support for 65W fast charging. 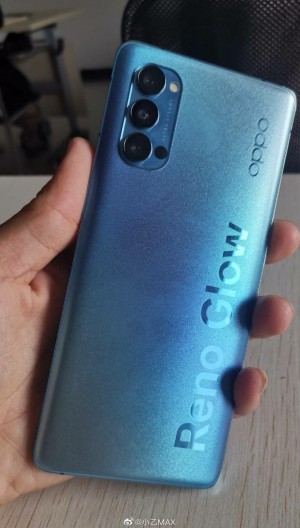 The non-pro alternative is roughly the same but misses on the OIS for the main cam, an 8MP ultra-wide one replaces the dedicated video unit and the telephoto is swapped for a 2MP depth sensor. On the front, however, in addition to the 32MP main sensor, there’s also a 2MP one likely used for depth information. The screen itself is slightly smaller at 6.43″ and judging by the specs sheet, this one’s going to be flat. On the memory front, the 8GB/128GB option is still at hand, but the one with the 256GB internal storage comes with 8GB of RAM.

The leaked images and the teaser video shared by Oppo seem to be depicting the same Reno4 Pro – single punch-hole camera on the front, curved display, triple-camera island in the upper left corner of the back, no 3.5mm audio jack at the bottom and the mysterious fourth sensor on the back, which we saw yesterday, appears to be laser focus.