Realme just unveiled two new Narzo series smartphones, dubbed Narzo 10 and Narzo 10A. Now the company plans to follow that up with the launch of eight new products on May 25 in China.

The launch event will be streamed online starting at 2PM local time (6AM UTC).

Realme doesn’t explicitly mention what exactly it’s going to unveil on May 25 but the poster shared by the Chinese phone maker on Weibo includes a smartphone, a power bank and a truly wireless earbud.

The white-colored Chinese text in the image translates to “Broken Dimension Dare To Play”, which could be a hint that the smartphone will be gaming-oriented. 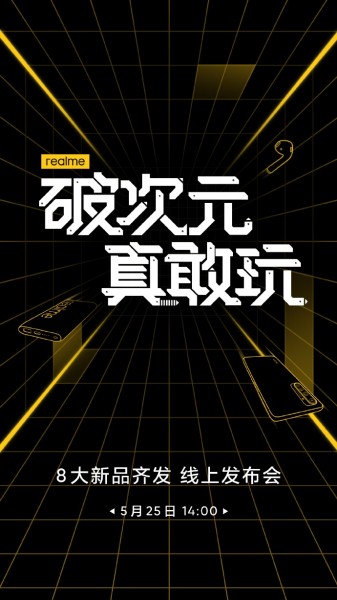 In a separate post, Realme introduced its first two-dimensional female product manager, who is a “collection of beauty and wisdom” (machine translated from Chinese). You can see her wearing neckband wireless earphones, which could be the Realme Buds Wireless Pro with a USB-C port. She’s also holding a new Realme smartphone in her hands. 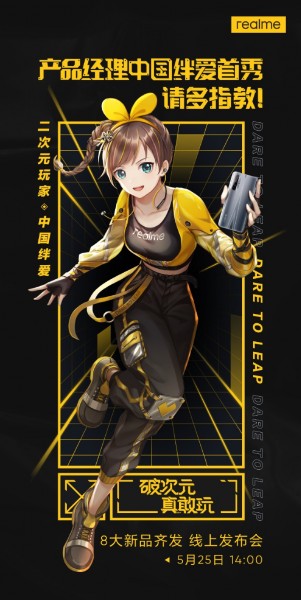 This smartphone looks the same as the one teased by Realme VP and CMO Xu Qi Chase. Chase confirmed it will arrive on May 25 and says it is codenamed Blade Runner. A reliable Chinese tipster claims this smartphone will be called Realme X50 Pro Player Version (translated from Chinese), meaning it could be the company’s first gamer-centric smartphone. 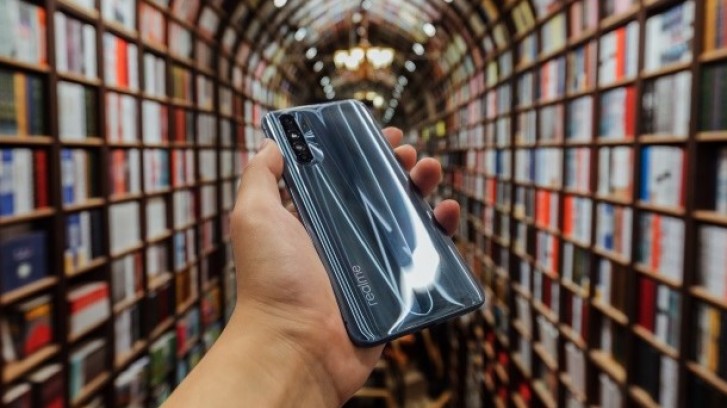 We’ve also been hearing about the Realme X3, X3 SuperZoom and Realme TV lately and we might see these go official on May 25. A recent report claimed Realme is planning to launch its first smartwatch and smart TV in India by the end of this month.

We don’t have an official timeframe for the launch of Realme’s smartwatch, but back in February the company confirmed it will launch its smart TV in Q2 2020. However, it will arrive in India first, so if Realme is launching its smart TV on May 25 in China, we’ll see it debut in India before that.

We are still over a week from the May 25 event and we are likely to hear more about the products it’s launching in the coming days.