The latest industry research report from Gartner brings a report about Global smartphone shipments during the first quarter of the year. As we are all well-aware, COVID-19 began disrupting the world starting from around December, which resulted in a global halt of a lot of manufacturing and sales in China before the virus spread worldwide. Consumers were spending less on non-essential items which caused global smartphone shipments to decline altogether. 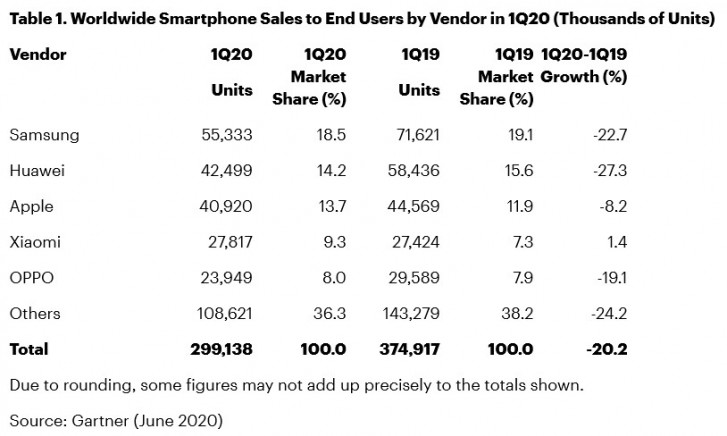 Apples ability to serve clients via its online stores and its production returning to near normal levels at the end of March helped recover some of the early positive momentum, explained Zimmermann.

Apple had a strong start to the year thanks to its new product line up that saw strong momentum globally. If COVID-19 did not happen, the vendor would have likely seen its iPhone sales reach record level in the quarter. Supply chain disruptions and declining consumer spending put a halt to this positive trend in February.  Annette Zimmermann, Research Vice President at Gartner

Huawei will struggle as it tries to regain momentum following COVID-19. On top of delaying production and sales, It continues to deal with the US extension of its ban against Huawei’s doing business with American companies, barring it from its Google Play License and forcing it to ship all its phones with HMS (Huawei Mobile Services) instead.

Check out the source link for the full report from Gartner