Samsung Galaxy M01 and M11 launching in India on June 2 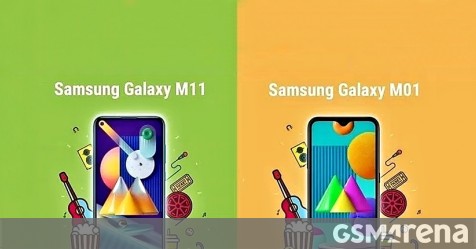 A few days ago, we heard quite a bit of chatter about the Galaxy M01 and M11 coming to India as early as the start of June. Now we have an even more specific date and time for the launch  June 2 at 12PM. The specific time is a bit unexpected, since it seems unlikely for Samsung to hold and actual event for the budget pair. Still, we could be treated to some formal unveiling, even if it is a scheduled promo video. Alternatively, you can expect to see listings go up online.

Well likely be keeping a closer eye on the Galaxy M01 ourselves, since, unlike the M11, its specs sheet is still not entirely cleared-up. Thanks to another recent leak, we are expecting the budget device to pack a 5.71-inch LCD display with HD+ resolution (720 x 1560 px), Snapdragon 439 paired with 3GB of RAM and 32GB of on-board storage and a 4,000 mAh battery, packed inside a 146.3 x 70.86 x 9.8 mm body. The M01 is also expected to have dual-main cameras, consisting of a 13MP main shooter, with f/2.2 aperture and a 2MP depth sensor, with f/2.4 aperture. On the front – a 5MP snapper, with f/2.2 aperture. Other bits and pieces we know will be present include Bluetooth 4.2, Wi-Fi b/g/n, a 3.5mm audio jack, Dobly Atmos sound, Samsung Health, One UI, and Face unlock. The inclusion of a microSD card slot is still debated among sources, but this latest one does claim that expandable storage will be present on the M01. 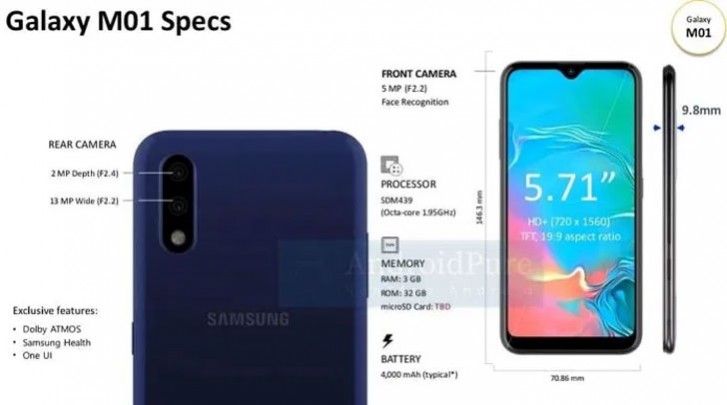