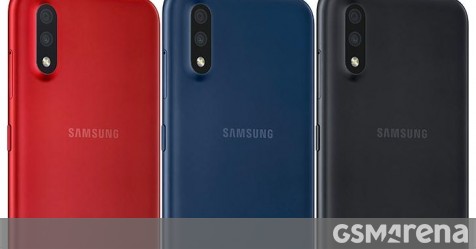 A schematic containing the Samsung Galaxy M01s specs and dimensions has been provided by the folks over at Android Pure. The drawing appears to be something youd find on a quick start guide or inside an instructional manual for the smartphone, which lists a few of the devices specifications and the phones dimensions.

The phone will be powered by the Snapdragon 439 paired with 3GB of RAM and 32GB of on-board storage. A 4,000 mAh battery will keep power up the device.

Theres a 5.71-inch display with HD+ resolution (720 x 1560 px), which comes out to a 19:9 aspect ratio. Then there are the dimensions of the phone, which measures 146.3 x 70.86 x 9.8 mm. The other things mentioned in the diagram are Dobly Atmos sound, Samsung Health, One UI, and Face unlock. Whats interesting about this diagram is that the microSD card field is listed as TBD.

We have two possible explanations for this: either the schematic is part of a document that hasnt been finalized, or the schematic was manipulated. The latter seems likely, given the discrepancy of resolution in the drawing that doesnt match the one we saw from the Google Play Console leak. Theyre off by 20 pixels.

The latest rumors reported that the Galaxy M01 may go for a low price of INR 9.000 (~$118) when it launches in India. Both the Galaxy M01 and M11 (part of the same series) are expected to arrive in India sometime in the beginning of June.