Samsung Galaxy Note20 Ultra to have Snapdragon 865+, slimmer bezels than than Note10+ 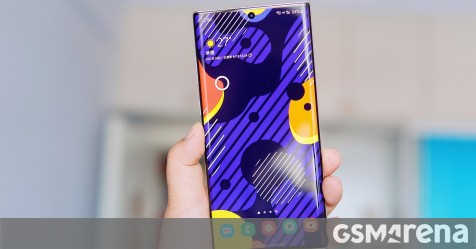 Samsung Galaxy Note20 is expected to come in two versions – vanilla and Plus-sized that might or might not be named Ultra. Now the prolific leakster Ice Universe shared some specs and dimensions of the phone.

The phone will be the successor of the Galaxy Note10+ and will come with the Snapdragon 865+ chipset that is yet to be announced. It will be a bit narrower, with smaller bezels and smaller punch hole for the single selfie camera.

The new phone will have a 120Hz display of QHD+ resolution, and unlike the Galaxy S20 series, you will get the option to use both at the same time. The Galaxy S20 family allows only a 60 Hz refresh rate with the highest resolution. The display itself will be LTPO OLED which will allow for better power efficiency.

Size-wise, the Galaxy Note20 Ultra will be 0.3 mm thinner, while the hole for the front-facing cam is reduced by 1mm in diameter. Bezels on the sides will be narrower than the Galaxy Note10+ by 0.29mm. The top and bottom bezels will also be trimmed down by 0.4mm.

While the phone is scheduled to arrive in August, industry insiders shed some light on other devices from the Galaxy portfolio – the Note20 lineup might debut alongside the new Galaxy Watch, while the Galaxy Fold2 and the 5G Galaxy Z Flip will appear allegedly appear in September.