Case renders show the Galaxy Note20+ will have a curved screen, Note20 screen will be flat 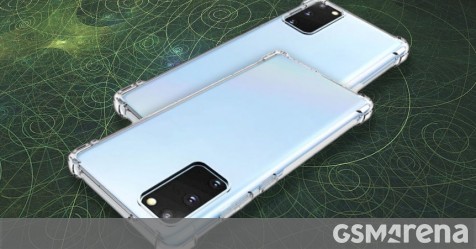 Some sellers on Alibaba already have Galaxy Note20+ cases ready to go. They show renders of the device that are based on incomplete schematics  the front side was clearly left to the imagination, but the back and sides should be pretty accurate (since the back and sides are what the case covers).

Speaking of the sides, notice the curved screen. The left and right sides of the case go up only part way, the rest is screen. There are lips on the top and bottom that help secure the phone in place.

Moving over to the Galaxy Note20 cases, the sides of the case go all the way to the front, so it will have a flat screen. This matches what weve seen in renders of the Note 20 and of the Note20+. This would be a detour from Samsungs strategy of exclusively using curved screens on its flagship phones (which dates back to the Galaxy S8).

The bottom side shows three major holes  one for the USB-C port, one for the speaker grille and one for the S Pen (plus a small hole for the mic). The top is pretty bare with only a hole for a microphone.