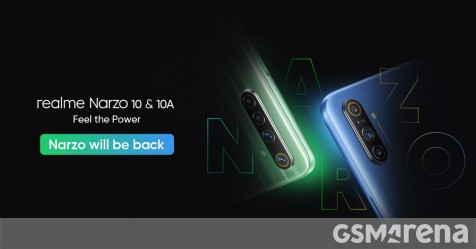 Yesterday vivo announced that it has indefinitely suspended the launch of V19 and other new products in India due to the outbreak of COVID-19 in the country. Now, Realme too announced that it has postponed all upcoming launches in India, including the Narzo 10 series, which was supposed to be unveiled tomorrow at 12:30 PM local time (7 AM UTC) through a pre-recorded video.

With respect to the announcement made by our Honourable Prime Minister yesterday, we have decided to suspend all upcoming launches including #realmeNarzo series.

Time for us to focus on our family & ourselves. Stay at home, stay safe & cooperate with local authorities. pic.twitter.com/4FmdanvgHL

Before the lockdown was announced, Realme said that it will delay the sales of the Narzo 10 and Narzo 10A in India until further notice, and will proceed to launch the Narzo 10 duo on March 26 through a pre-recorded video.

Realme has not only suspended the launches of new products in India but has also halted its ‘Make in India’ facility in the country until further notice from the government.

With vivo and Realme’s launches in India canceled, it now remains to be seen if Xiaomi will also follow suit or proceed as planned to launch the Mi 10 in the country on March 31.