Huawei P40 lineup – what to expect

Even though the upcoming Huawei P40-series won’t be loaded with Google Mobile Services the flagship series from the Chinese maker some of the most anticipated handsets this year. The announcement date is set for March 26 but we got plenty of early leaks to have a good idea what to expect. So much so in fact that we felt we need to sum them up and compile a nice little cheat sheet.

Following the footsteps of Apple and Samsung, Huawei is planning to release three versions of its P40 handset – the usual vanilla and Pro models will be joined by a Premium Edition, which will be the highest sitting member of the lineup.

From what we’ve heard so far, the biggest difference between the three handsets is the camera setup. We might also see variations in the screen size, but leaks suggest that won’t be the case.

All three handsets will sport Huawei’s latest in-house HiSilicon Kirin 990 chipset found on today’s Mate 30 Pro and the updated Mate Xs phones. A leaked Geekbench score sheet from the other day confirmed the Kirin 990 SoC on the P40 and the accompanying 8GB of RAM. Though, we are pretty sure some configurations will offer more RAM.

Other specs such as battery and detailed screen info are yet unknown but there are plenty of renders, pictures and camera rumors to go through.

Huawei will give you a choice between three types of materials – glass, ceramic and vegan leather. The latter was available months after the launch of the P30 Pro last year but this time around, the company will be offering all material options from the start. There’s a leaked render depicting all three models in the alleged color variations. The penta-camera setup belongs to the Premium model, the quad-camera module is for the P40 Pro and the vanilla P40 settles for three rear-facing cameras.

The penta-camera setup on the back of the P40 Pro Premium is said to offer two separate zoom cameras. The periscope module could reach 10x optical zoom with 240mm focal length while the other module will stop at 3x zoom. 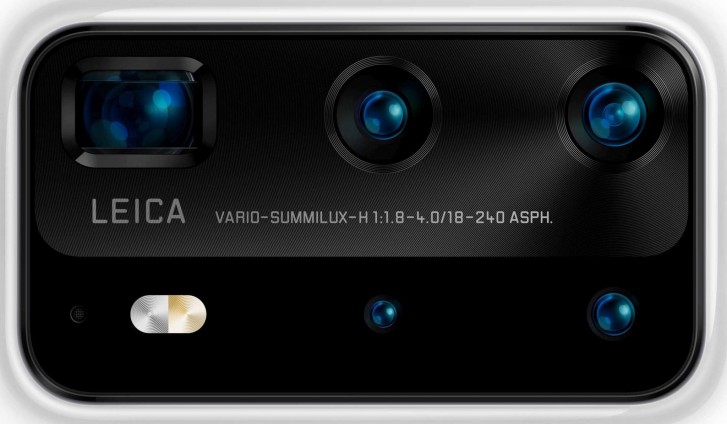 The main camera is also believed to be no less impressive. Huawei is getting another custom Sony RYYB sensor – also used in last year’s P30-series. This time around, however, the sensor will be 52MP (1/1.28″) offering “Quad Quad Bayer” pixel binning, meaning it will do two rounds of pixel binning when light is limited This will result in a 3.25MP resolution shots but also the largest pixel size ever on a smartphone. Huawei’s custom 52MP sensor is also reportedly even bigger than Samsung’s 108MP nona-bayer sensor, which measures at 1/1.33″.

href=”https://www.gsmarena.com/honor_will_introduce_a_2020_flagship_with_big_camera_pixels-news-41167.php”>focus more on the pixel size rather than the count.

There’s also going to be a set of additional sensors to aid the cameras – 3D ToF for depth sensing and temperature sensor for more accurate color temperature.

The ultra-wide cam is rumored to use a Sony IMX650 1/1.5″ sensor with 40MP resolution and will be branded as Cine Lens camera that has already been introduced with the Honor V30 Pro so it’s safe to assume that it will have a native 16:9 aspect ratio.

As for the P40 Pro, the phone will “settle” for last year’s 5x magnification (125mm focal length), the same 52MP main cam as the Premium and the 40MP Cine Lens for ultrawide photos. The vanilla P40 on the other hand, will allegedly feature a triple-camera setup consisting of a 52MP main one, unknown ultrawide unit and a standard 3x telephoto camera.

And even though we don’t know the battery capacities of all three handsets, the charging solutions are partially revealed by the Chinese 3C certification. The vanilla P40 will support Huawei’s 22.5W charging solution while the other two models will boast 40W SuperCharge support.

We have some early info regarding pricing as well. We expect the vanilla P40 to come around 799-899 depending on the configuration while the Pro will start at 999 and go up to 1,099. The Premium Edition will start from 1,199 and go to 1,299. Of course variances from country to country are to be expected.

We are excited to see what else these phones will pack. There are still a few more days until the announcement and likely, more will be unearthed by then.