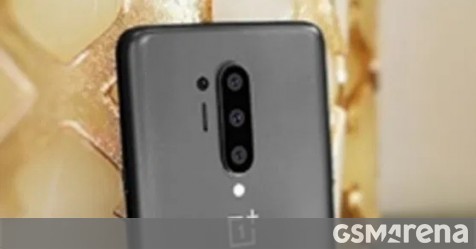 As we’ve seen from renders the upcoming OnePlus 8 Pro will have a punch hole selfie camera, leaving pop-up cameras and notches behind. The phone was captured on camera in the wild, offering another look at its front and back.

The new AMOLED screen will go up to 120Hz refresh rate (from 90Hz on the 7 and 7T). The Pro model will also have four cameras on its back plus a 3D ToF sensor, which you can see next to the vertical camera bump. The main camera is expected to use the 64MP Sony IMX686 sensor (0.8µm pixels).

The vanilla OnePlus 8 will have essentially the same design (save for the extra hardware on the back), but will be smaller than the Pro. Both phones will come in Gray and Blue, says the source that shared the images above. An Olive Green or Matte Gold could be added to the palette later.

Both phones are expected to be unveiled in April with sales commencing in May. Originally, they were planned for an earlier launch, but the COVID-19 situation impacted development and production schedules.

The third model has been called “OnePlus 8 Lite”, but this latest leak claims that the actual name will be OnePlus 8s. It will be powered by a Dimensity 1000L chipset and will come out towards the end of the second quarter (so around July). It was delayed as the outbreak slowed its development.