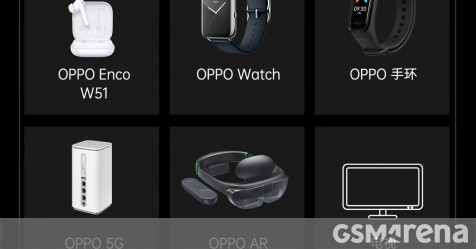 Oppo has been rumored to be developing a smart TV at least since Christmas and we now have some concrete proof of those plans. On its official Weibo page, the company published an infographic celebrating 1 year of commercial 5G efforts in China. We thought that it was 1 November last year when that kicked off, but Oppo may have something else in mind and even so that little discrepancy is beside the point.

Down at the very bottom of the rather long image, there’s a stylized depiction of a TV in a grid of pictured existing products.

Sister company Realme recently released a couple of smart TVs in India powered by Android TV and featuring Google Assistant. Priced very competitively, they could be a soak test before Oppo’s own foray into the field.

Oppo unveiled a set of truly wireless earphones, the Enco W51 the other day. Alongside them, the Oppo Band made a debut as well. Both of these devices are featured there in the infographic next to the TV’s placeholder, but the TV itself is yet to make an appearance.

Meanwhile, Nokia of all companies launched a smart TV as well, two days ago too. Apparently, smartphone companies can’t afford to not be making TVs anymore.