Redmi unveiled the K30 and K30 5G back in December and later launched the K30 Pro and K30 Pro Zoom in March with the Snapdragon 865 SoC. Today, the company announced that it will add a new smartphone to the K30 lineup on May 11, dubbed K30 5G Speed Edition (machine translated from Chinese). The event will start at 2 PM China time and will be streamed live.

Redmi didn’t reveal any specifications of the K30 5G Speed Edition, but the poster shared by the company on Weibo confirms the smartphone will pack a punch hole display accommodating two selfie cameras. 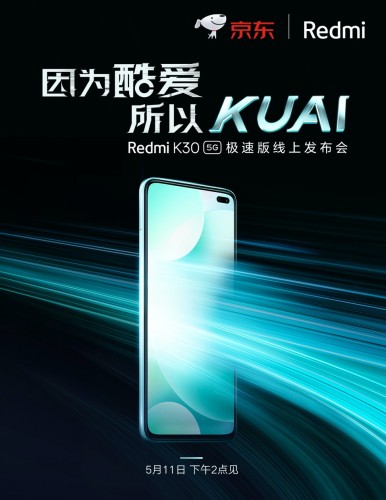 The image also confirms that K30 5G Speed Edition will be sold through JD.com, and the smartphone’s listing on the Chinese e-commerce site says it will come with a 64MP main camera joined by an 8MP ultrawide and 5MP macro units, have 6GB RAM and 128GB storage onboard, and pack a 6.67″ 120Hz LCD.

Redmi is also rumored to be working on a Redmi K30i 5G which is said to be the cheapest 5G smartphone, and it remains to be seen if the Chinese phone maker will announce it on May 11 alongside the K30 5G Speed Edition or unveil it separately.