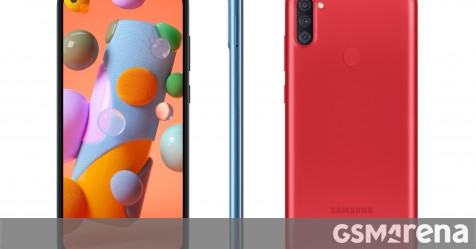 Today Samsung has listed a new phone on its official press website, the Galaxy A11, which has been in the leak cycle a few times lately. Oddly enough, there still isn’t an accompanying press release, and the spec list that is available so far is anything but complete, although we do get a bunch of official press renders to glance at.

The Galaxy A11 will, as its name implies, be Samsung’s new entry-level model in its mid-range A family of smartphones. It comes with a 6.4-inch 720×1560 LCD touchscreen with a punch-hole selfie camera in the top left (that’s an 8 MP unit with f/2.0 aperture).

The Galaxy A11 has a 1.8 GHz octa-core processor, although the SoC it’s part of isn’t mentioned. It will have 2/3GB of RAM, and 32GB of expandable storage. Lights are kept on by a 4,000 mAh battery with support for 15W wired charging. The A11 will be offered in black, white, blue, and red.

It’s unclear when exactly the handset will be in stores, which markets it will be available in, and how much it will cost. But now that the cat’s out of the bag, so to speak, we’ll surely learn more about those details (as well as the specs that are still missing) quite soon, so stay tuned.