The Samsung Galaxy Tab S6 Lite has been leaking left and right lately. This time around, the device got a pair of support pages live on Samsungs German website. 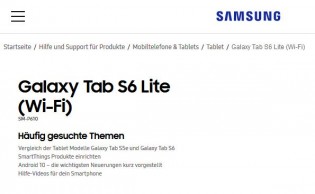 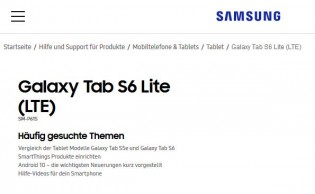 Unfortunately, we cant really expect a full, definitive specs sheet out of a support page. What they do confirm is that the Tab S6 Lite will be sold in a Wi-Fi only version  SM-P610 and an LTE one  SM-P615. As per previous leaks, these should cost 399 and 430, respectively in Europe. US pricing is a lot less certain, since all we have to go by on that front is an early, likely VAT-free listing on B&H, which has since been removed.

As for other specs the Tab S6 Lite is expected to sport an Exynos 9611 chipset, along with 4GB of RAM and 64GB of storage. A 128GB version might be on the cards as well.

The Tab S6 Lite is expected to pack a 7,040 mAh battery inside its 467-gram aluminum body. Other alleged details include an 8MP rear camera and a 5MP selfie one. No flash anywhere, as per leaked renders, though. Also, all the other connectivity basics, like Bluetooth and NFC. Owners could be getting an S Pen, bundled in the box, since the Tab S6 Lite does have support for the stylus.