The OnePlus 5 and 5T, hailing from 2017 and having launched with Android 7.1 Nougat, are now receiving the stable update to Android 10. The good news comes by way of user G_Ranjan_lenka_jAWE in the OnePlus forums, the company has yet to make an official announcement, which means that the rollout may be limited in scope right now. Indeed, the 5T unit we have on hand shows no update yet but others in the forum did get it.

Some of the changes are typical Android 10 fare  you get full screen gestures, for example, plus the location controls have been enhanced for better privacy. 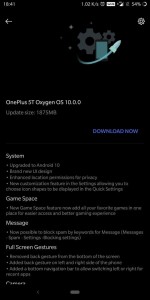 Stable Android 10 update for the OnePlus 5 and 5G

Other features are courtesy of OnePlus. The overall UI has been redesigned, the Messages app now allows you to block spam messages using a keyword filter, OnePlus is tinkering with the camera EIS too. Game Space has been introduced and even though it comes as part of an OS update, it will be updated through the Play Store in the future.

Which is good news as this is likely the last major update for the OnePlus 5 and 5T (though the company hasnt confirmed that yet).

The update is close to 2GB in size so if it did reach you, make sure youre on Wi-Fi and leave a note in the comments that you got it.