Mediatek is announcing a new chipset on Monday, a Xiaomi Redmi Note 10 got certified by TENAA recently and now the same phone has appeared on GeekBench with an as-yet unofficial Mediatek SoC – the stars are aligning nicely, we reckon.

About a dozen entries in the benchmark’s database feature the Xiaomi M2004J7AC, the specific model number we saw in the Chinese regulator’s listing, as well as an M2004J7BC. The ‘A’ model goes by the code name ‘atom’, while the ‘B’ one is called ‘bomb’. 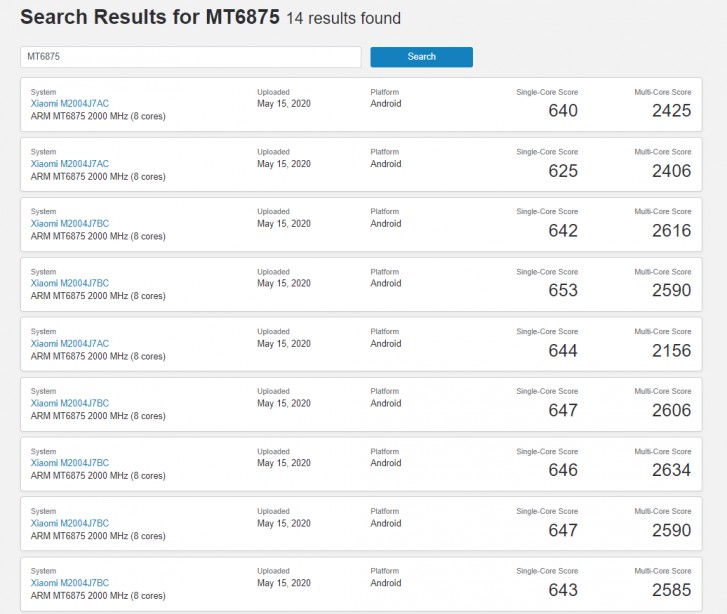 Both devices are powered by a Mediatek MT6875 chipset, which is an unannounced SoC and very likely the oft-rumored Dimensity 820 that we’re expecting in a couple of days. Its octa-core CPU base frequency is listed at 2.0GHz in the benchmark files, while the TENNA entry specified 2.6GHz but the second number could very well be the ceiling that the chip will reach. Both versions seen on GeekBench have 8GB of RAM and run Android 10.

The benchmark scores have settled on around 640 units in the single-core test and 2600 units in the multi-core for the Bomb, with the Atom posting slightly lower multi-core figures – in the 2400s. Looking at our database, the new SoC’s results are just under Qualcomm’s last-gen flagship Snapdragon 855 – not half bad.

We expect to have more info on the Mediatek Dimensity 820 on Monday when it’ll go official. As for the Redmi Note 10, well, that one should likely follow very soon after.