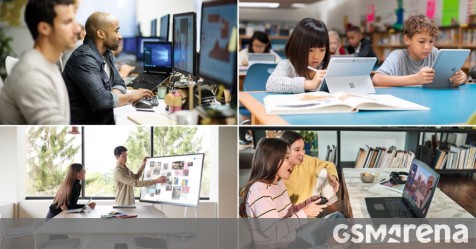 Microsoft’s Windows 10 is a success – the company reports over 1 billion monthly active devices. This comes less than 5 years after it launched and in that short period of time it has gone far beyond the PC.

It does indeed power plenty of desktop PCs along with 80,000 different models and configurations of laptops from 1,000 manufacturers. And, naturally, it’s at the heart of the new Xbox consoles, including the upcoming Xbox Series X.

Microsoft is playing with different form factors – going from small screens like on the Surface Pro to huge ones on the Surface Hub 2S interactive whiteboard. Even more interesting is the dual-screen Surface Neo, which will run a special version of the OS dubbed Windows 10X. Then there are the unorthodox devices like the HoloLens (which is also powered by Windows 10).

Microsoft relies on its Insider Program to catch issues with Windows, which currently boasts close to 18 million members hailing from every country around the world.

“We are inspired by the ways you use Windows 10, and we look forward to seeing how you continue to use these billion devices in new and exciting ways to power the world,” writes Microsoft.

There’s only one failure in Windows 10’s history and it’s a big one – it barely made a dent in the smartphone market and is gone from it completely (the Surface Duo dual screen phone runs Android).